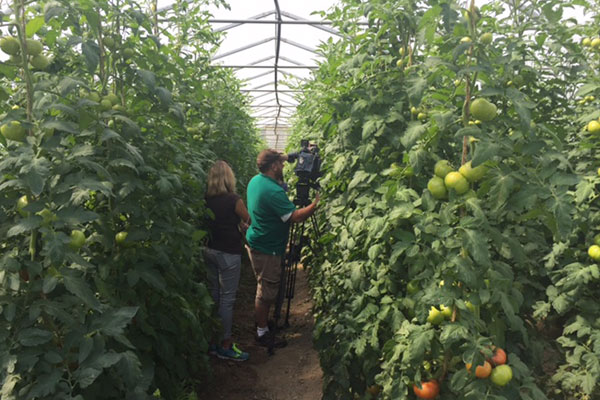 Casa Visco, Which Distributes Sauce Across The Nation, Recently Created a New Line Coined “#AwesomeSauce!” Which Sources A Majority of the Ingredients Locally

(Schenectady, NY) – Many food companies throughout the nation are feeling the effects of the California drought, an on-going problem which has been particularly serious over the last four years. This year has been very difficult as the Governor of California declared a state of emergency in January and ordered residents of every region to conserve water or face penalties, for the first time in history. Casa Visco, a leading national manufacturer of pizza and pasta sauces headquartered in upstate New York, has been using this crisis as an opportunity to work with local farmers. Previously, they had sourced a number of produce items from the western part of the nation. The tough situation inspired Casa Visco Co-owner Adine Viscusi to create a new line coined “#AwesomeSauce!” which uses over a dozen fresh local ingredients. “Our Vegetable Garden brand has 13 fresh veggies and spices. We visited local farmers in the Hudson Valley region and talked one-on-one with them about what grows well and to get their ideas on types of produce to use. We had never even thought about using summer squash as an ingredient until a farmer pointed out that it is abundant, grows well and is not too costly,” she said.

The California drought has absolutely affected the sauce company and many other businesses throughout the nation. Viscusi points out that they’ve had their tomato contracts cut due to the conditions. In addition, the current cost of transporting produce all the way across the country is tremendously steep. Viscusi said, “We are hoping that ‘#AwesomeSauce!’ highlights the importance of thinking local and acting local. I believe people have an increased awareness about where their food is coming from and the positive impact that helping local farms can provide. We have certainly learned so much from working with the farmers in Hudson Valley and love supporting them.” Interestingly, prior to the 20th century, the majority of produce consumed in the United States came from small farms that grew a relatively diverse number of crops. Fruit and vegetable production was regional and varieties were determined by the climate of those areas. It seems local is coming back full circle due to the current climate conditions.

#AwesomeSauce! is a line that includes three varieties: Tantalizing Tomato, Vegetable Garden and Global Spice. Global Spice also uses ingredients from around the world such as Sriracha from Thailand and Korean chile powder. They are currently presenting their product to grocery stores and using their vast network of broker and distributors to introduce the trade. They recently provided each person who attended their 70th anniversary celebration with a jar of the savory sauce and have been receiving rave reviews. “We are hearing amazing feedback from people who have tried the sauce. It’s wonderful to combine the many fresh flavors together for an outcome we can all stand behind.”

This past year Casa Visco has gained even greater national recognition after being approached by Beekman1802 to design a sauce for their line of artisanal products. It has since gained national distribution in 1500 Target stores. Beekman1802 is comprised of Brent Ridge and Joshua Kilmer-Purcell. They were winners of the Amazing Race in 2012 and now have a TV Show on HGTV. The partners currently operate a Mercantile, have a bestselling cookbook and memoir, host a popular website and provide a tourism destination. This has all been inspired by their farm, located in Sharon Springs, NY. It is yet another example of a company who utilizes local products.

Casa Visco has also gained significant traction with their popular selection of pizza sauces. Focusing in on the pizza sector they became the #1 DSD brand in New England, placed in almost every major grocery chain. The specialized product can now be found in 33 states.

The company plans to continue to focus on helping local farms and helping their local economy. They also support the non-profit Regional Food Bank of Northeastern, New York. They have committed to donating a dollar of every case of #AwesomeSauce! sold.

In 1945, Carmella and Joseph Viscusi, Sr. started Viscusi Wholesale Grocers, Inc., a small wholesale grocery business. The business specialized in selling Italian food products to restaurants and grocery stores. At the request of their customers, Carmella and Joseph, working out of the basement of their home, started to bottle and sell Carmella’s famous homemade spaghetti sauce under the Casa Visco name.
Since it’s humble beginning, Casa Visco has grown substantially. Casa Visco now operates a state of the art automated facility. Our commitment to quality has not changed, a family member still oversees each batch of sauce that is manufactured. Casa Visco’s emphasis on the use of quality ingredients and homemade goodness has led to being the #1 DSD Brand Pizza sauce in all of New England.
Casa Visco currently exports its products to several countries. Casa Visco has the high quality products that importers demand, at prices that really work in overseas markets. For information about export services, contact us at 518-377-8814 or by email at info@casavisco.com.