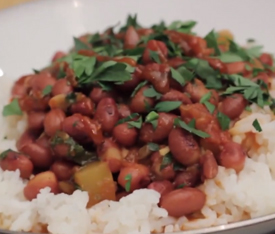 Spanish for “May 5th”, or literally, “Five of May”) is a celebration held on May 5. The date is observed to commemorate the Mexican army’s unlikely victory over French forces at the Battle of Puebla on May 5, 1862, under the leadership of General Ignacio Zaragoza Seguín.

In the 518, its commonly known as Adine’s signature party. It started innocently enough, an unlikely group of women at the local gym, all four, independent, keep-to-themselves kinda women. They enjoyed talkin’ trash about beans and rice… The three Latina women were woefuly skeptical about Adine’s ability to make some authentic beans. Game on. They came, I cooked, we celebrated all the good stuff that brings people around a table and creates family. That’s the key to a happy life, find your tribe, sign up and show up. Now, 17 years later, we have have the honor of celebrating Cinco together. It’s a bit bigger than just the four of us; a crazy organic hot mess in the best possible way. And it all started with this dish, and some trash talkin’ women at the gym. #findyourtribe