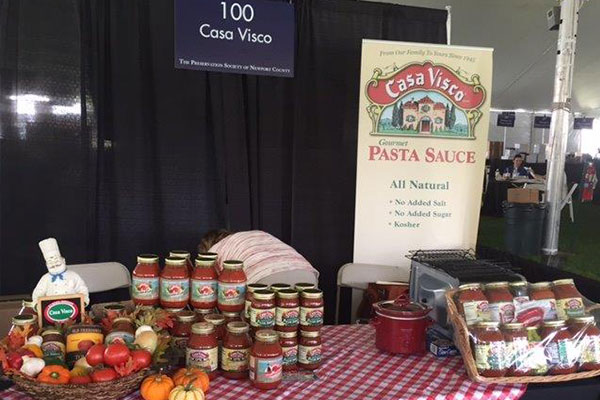 (Schenectady, NY) — Casa Visco, a leading national manufacturer of pizza and pasta sauces, will be featured at the 10th annual Newport Mansions Wine & Food Festival to benefit the Preservation Society of Newport County from September 25-27, 2015 at Newport Mansions (The Elms, Rosecliff & Marble House). Food & Wine is a presenting underwriter of the popular event that attracts over 5,000 attendees from the New England Region and beyond.

Casa Visco, who has previously been showcased at the event, will be positioned at location #100 and will include members of the Viscusi family who have owned the company for 70 years. Adine Viscusi, the current owner and her parents, the previous owners, will be making creative pizzas and presenting their latest line of fine sauce coined #AwesomeSauce!.

This has been an exciting year for the company headquartered in Schenectady, NY. They were approached by Beekman1802 to create a sauce for their line of artisanal products. The sauce quickly gained national distribution at Target stores throughout the United States. Because of the popularity of “Mortgage Lifter Heirloom Tomato Pasta Sauce”, Target asked Beekman 1802 to produce 48 new products that use ingredients from small farms. Casa Visco is proud to be part of this successful partnership. Co-owner Adine Viscusi said, “This is an example of a positive collaboration where everyone wins. We are so proud to have been approached by Beekman 1802 and provide them a sauce that helps their company reach the next level. We are also very dedicated to supporting local farms and encourage other companies to do the same.”  They are looking forward to further exploring their relationship with Josh and Brent, co-founders of the Beekman 1802 company, which is comprised of Brent Ridge and Joshua Kilmer-Purcell. They were winners of the Amazing Race in 2012 and now have a TV Show on HGTV. They also currently operate a Mercantile, have a bestselling cookbook and memoir, host a popular website and provide a tourism destination. This has all been inspired by their farm, located in Sharon Springs, NY.

Also, within the last year, the company created a new line of sauces called #AwesomeSauce!. This particular line developed out of the California drought and the need to go local. Viscusi points out that they’ve had their tomato contracts cut due to the tough conditions. In addition, the current cost of transporting produce all the way across the country is tremendously steep. Viscusi said, “We are hoping that #AwesomeSauce! highlights the importance of thinking local and acting local. I believe people have an increased awareness about where their food is coming from and the positive impact that helping local farms can provide. We have certainly learned so much from working with the farmers in Hudson Valley and love supporting them.”  Interestingly, prior to the 20th century, the majority of produce consumed in the United States came from small farms that grew a relatively diverse number of crops. Fruit and vegetable production was regional and varieties were determined by the climate of those areas. It seems local is coming back full circle due to the current climate conditions.

Casa Visco has also gained significant traction with their popular selection of pizza sauces. Focusing in on the pizza sector they became the #1 DSD brand in New England, placed in almost every major grocery chain. The specialized product can now be found in 33 states. “We add new items every few years to remain relevant and watch food trends.  We want to provide the highest quality of sauce from our family to yours. We don’t process our sauce like the major producers do, we take the time to make the sauce the way you would at home. We use natural ingredients, slowly cooked in small batches. We include fresh garlic, onion, and pure olive oil. This is true to the traditions of the past and firmly rooted in the heritage of my grandmother Carmella who passed out tomato sauce from her garden. We honor her roots by looking forward to understand what matters most to us; providing a delicious sauce you can be proud of to serve your family,” said Viscusi.

Viscusi’s grandparents, Carmella and Joe, started the company as Viscusi Wholesale Grocers on Foster Ave in Schenectady, NY.  They sold grocery staples like flour, tomatoes, and cheeses.
Carmella, like most Italians, picked tomatoes from her garden and gave out her sauce as gifts to friends, neighbors and customers who always asked for more to purchase. So, the couple started bottling it in in their basement.  They proudly coined the sauce “Casa Visco”, an Americanized version of their name. It translates to “from the house of Viscusi”.

As wholesale grocers, they sold staples to restaurants, delis, pizzerias and small mom & pop stores which were prevalent during that time period. After Carmella and Joe passed away the business was taken over by sons Mickey and Joseph. After deciding to sell the wholesale grocery business to Crisafulli Brothers, they focused solely on the Casa Visco brand. They added automated packing equipment and learned how to build a production line as they went. They also tested all kinds of specialty items including: mustards, BBQ sauces, wing sauces and salsas. They serviced local Price Choppers and Grand Union grocery stores with own trucks and salesmen who were prepared with order books and handwritten invoices.

Adine Viscusi is proud to be an active participant at the Newport Mansion Wine & Food Festival. “ Food is meant to be celebrated and bring family and friends together. We are looking forward to having our family meet yours at this festival as well as support an incredible cause, “ she said.

For information about export services, contact us at 518-377-8814 or by email at info@casavisco.com.